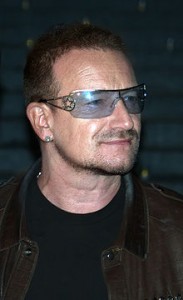 From humble beginnings, Paul David Hewson, born in May of 1960, has risen to dizzying heights…the passion, poetry and faith of U2’s peerless frontman have become the stuff of legend…

Although this singer/songwriter has earned countless accolades (and untold millions) from his recordings and tours, he has also become a lightning rod for controversy, and even mockery.

This larger-than-life performer gives his all every time he walks onto a stage…to his political activism and his faith, he brings the very same devotion and visionary zeal.

For fans, Bono is a romantic, mystical spirit – his ideals inspire. At once poetic, earthy, and sensual, he offers intense, charismatic presence and great talent. To detractors, he is pompous, pretentious, and simply too much.

Whether you love or hate Bono (and few are ambivalent), you cannot dismiss or ignore him. His songs have become a part of culture and society.

From the blistering, raw passion and beauty of early work like Gloria (In Te Domine), which celebrates the power of God, even as it illustrates the struggles and suffering of the faithful…

“Only in you I am complete…”

…to the uplifting, totally irresistible (and Gospel-inspired) I Still Haven’t Found What I’m Looking For…

I have climbed the highest mountains…I have run through the fields,

…Bono’s brilliance is difficult to deny. While some feel that current hits, such as Elevation, lack the gravity and beauty of earlier work, others (including a whole new generation of fans) are embracing the band’s new direction.

Along with bandmates The Edge (a truly singular guitarist!), Adam Clayton (bass), and Larry Mullen Jr. (drums), Bono has travelled many pathways. Taking risks and changing directions are par for the course with U2. From the Americana-infused Rattle And Hum and The Joshua Tree albums, to the harder-edged, electronic grooves of Achtung Baby, to the early classics (Boy and October)…U2 have something to offer almost anyone who enjoys rock’n’roll.

It’s been a long time since Bono jumped off the Live Aid stage and interacted with joyful fans…today, he tones down some of his theatrics…however, his desire to connect is still an element in his personality.

He works hard to raise money that is used to help treat (and prevent) AIDS in Africa. Through the Project Red charity initiative, he uses his own celebrity (and that of his esteemed friends and colleagues) to make a difference.

Bono’s life may seem like a contradiction of sorts – he does lead a glamorous existence, spending months of each year soaking up sun in the South of France. His lifestyle is a million miles away from the lifestyles of most of his fans, not to mention the poor people of Africa.

However, he has earned his money fair and square – he has worked hard for what he has. Many rock stars choose to concentrate only on their friends, family, and elite lifestyle as they age. Bono never seems to take off his signature dark glasses (reportedly due to an eye allergy), but he does seem to look out at the world around him, and attempt to alleviate suffering…he does have a certain sense of honor…

History will place Bono alongside the most famous Irishmen of all…Oscar Wilde, Van Morrison, W.B. Yeats…as a poet and a singer, he has earned his rightful place… 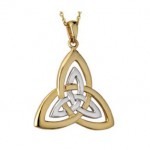 This beautiful Trinity Knot pendant is an homage to thousands of years of Irish and Celtic history. Since the sixth century, this motif has been a symbol of the Holy Trinity.

If you share Bono’s heritage, ideals, and faith, this stunning 14k, two-toned gold design will become an everyday favorite that you treasure.

Handcrafted quality and authenticity (each piece is crafted in Ireland and stamped at Dublin Castle) give this pendant heirloom beauty that also honors your own ancestry.