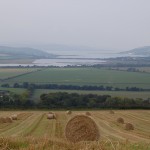 Many of Ireland’s medieval masterworks and artifacts survived intact though the wars and upheaval of this important historical period. Since the country was largely surrounded by water, it was less accessible to pillaging and attacks from enemies.

Around this time, the glorious Celtic Crosses of Ireland began to appear in abundance all over the land, marking graves and decorating churchyards and medieval treasures.

The influence of Saint Patrick, who formed a spiritual community devoted to Christ during the Middle Ages, was also a factor in the Church’s growing strength (after the fall of the Holy Roman Empire)…

Later known as Ireland’s Saint Patrick, young Patricius came to Ireland from Roman Britain (under duress) after a cruel kidnapping. He experienced spiritual revelations during this difficult, lonely time, and then he made the decision to devote his life to converting the Irish to Christ.

Over the course of his lifetime, he created schools, supervised the construction of churches, and united the community under God.

His mission to root out Paganism was largely successful during the Middle Ages, but remnants of the old ways still remained…in fact, the traditional Celtic Cross still features a distinctive ring at its center…this design is a symbol of Pagan Sun Worship…

Saint Patrick wrote two defining works during this period: “Confessio” and Patrick’s “Letter to Coroticus” – both of which outlined his life experiences and his religious beliefs.

In Medieval Ireland, The Shamrock Became An Important Symbol

Because of Ireland’s unique geography, the nation escaped the strong Roman influence that was so prevalent in the cultures of other nearby countries.

For this reason, the Celtic culture remains unique and individual.

During the Middle Ages, Irish monks began to explore different ways of demonstrating their love of God and sharing their message with the common people.

Beautiful, ornate illuminated manuscripts were created during this phase, such as the seminal Book of Kells. Lovely interlace (or knot work) borders, careful calligraphy and stunning artwork told the five stories of the Gospel in a compelling way.

Today, the Book of Kells rests at Trinity College, in Dublin, Ireland – it is considered Ireland’s greatest art treasure.

The influence of the Vikings, who invaded Ireland and left traces of their language and culture with the monks (and others) they controlled, also influenced Irish culture during this period.

As well, in time, the influence of the British began to make an impact on Irish culture, though it was resisted quite strongly…

For the Irish in the Middle Ages (and today), cultural identity was (and is) a source of great pride – indeed, the Irish people have maintained a distinct identity throughout the centuries. 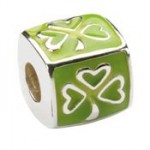 The spirit of Saint Patrick lives on in the designs of Ireland’s modern artisans. Each piece they create honors the artistry, skill, and spirituality of this ancestors.

This beautiful enamel and silver Shamrock charm features the simple but powerful Shamrock, with its three tender leaves…each segment of the Shamrock represents one part of the Holy Trinity.

Today, women can honor the spirit of Saint Patrick (and Ireland) by wearing a Shamrock charm from the Tara’s Diary Collection on their charm bracelet.

Affordable and handcrafted, this design is just one of the lovely styles we offer at our online Irish jewelry store, which specializes in the finest Irish and Celtic designs.