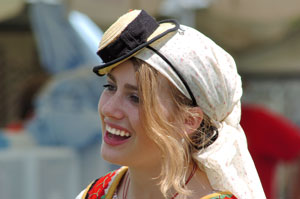 The very first Irish dances can be traced back to the days of the Pagans, when ceremonial dances were performed out of doors to honor nature.

For example, dances that celebrated Sun worship were believed to be an integral part of Druid rituals.

As the country evolved, the Pagan ways faded into the mists of time, but the ancient traditions of Irish dance and performance continued to evolve.

Today, the Emerald Isle is well-known for its vibrant and unique dance scene, and those of Irish descent, who now reside in other countries, also carry on the legacy of their ancestors.

From stepdancing, which became more famous due to the success of the Riverdance show, to social dances like Ceili, where groups perform in set formations…there are many ways to enjoy the timeless spirit of Irish dance in the modern world…

Here is a quick guide to the most popular forms of traditional Irish dances, and their historical significance: 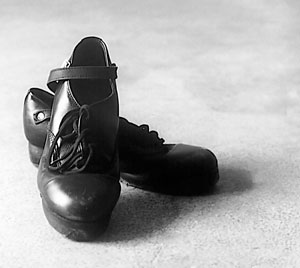 This energetic, lively form of dancing has become a sensation worldwide.

In the early years of the 20th century, Irish dancing masters would travel the country, instructing young people by teaching them the intricate steps and postures of this charming art form.

One signature of this distinctive style is that the upper body and arms are held very still, while the feet move adroitly and quickly through ordered steps.

There are many theories about why this unique stiffness of the upper body became a facet of Irish stepdancing. Some feel that is was a political statement, tied in to Ireland’s oppression by England.

Others feel it stemmed from the old habit of taking down a door and practicing steps upon its narrow wooden surface; dancing in this way would make it difficult to move the upper body freely.

Whatever the actual reason for the tightly controlled torso and arms of traditional Irish dance, it has become the hallmark of this style. In stepdancing, movements are precise and there are many rules to be followed.

Many children today enjoy learning the steps and techniques of this dance style, and it keeps the Gaelic spirit alive in Ireland and many other countries around the world.

These Irish folk dances are quite different from step-dancing. They rely on the careful use of formations, where a group of people will dance together, “in the round”.

Certain steps, such as the Irish Jig and the Promenade Step, are features in Irish Ceili dances. According to historians, this style of dance, which utilized formations such as line and square dances, was brought to Ireland by the Normans in the 12th century.

Many Irish people, including Irish-Americans, enjoy the festive spirit of Ceili dances, such as The Fairy Reel (which requires six people). The Bridge of Athlone is another popular dance that features two lines of dancers, with couples facing one another.

These dances inspire closeness and camaraderie – they often require hand-holding, knee-slapping, and “bridge-making”.

As you can see, the potential for artistry, fun, and connection to your own heritage is endless when you begin to experience the wonders of Irish dance.

This beautiful art form, in all its many styles, provides a lasting link to the traditions of Ireland’s past. Each generation brings new choreography and creativity to this living art form.

Celebrate your love of Irish Dance by collecting charms to honor its beauty and spirit. The Tara’s Diary Collection offers a starter charm bracelet in silver, and a selection of pretty charms that feature Irish and Celtic motifs.

For the dance aficionado, one charm in particular will make a perfect gift idea: 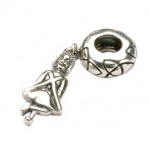 This Dancer Charm will fit onto a Pandora’s Box charm bracelet, as well as the Tara’s Diary bracelet, so it can be a versatile gift idea for anyone who enjoys Irish dance.