If you think you know a lot about Ireland – think again! You may be very interested in reading about these lesser-known Irish facts.

Commonly-known facts about Ireland are often centered around Celtic folklore, political unrest (i.e. The Troubles), and notable Irish contributions to art and culture (from Oscar Wilde to Bono).

However, there are so many fun (and unexpected) tidbits about this unique country – here is a sampling of some things you didn’t know about Ireland:

Dracula was “created” by an Irishman – 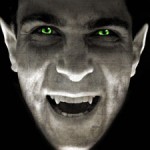 Today, vampires are hotter than ever! Twilight and New Moon offer younger generations a chance to connect with the ancient legends. However, the world’s most famous vampire will probably always be Dracula.

This character was created by an Irishman, and his name was Bram Stoker.

Many people don’t realize that the man who crafted this flawless, macabre tale of blood-drinking in Transyvania was actually born in Clontarf, Dublin.

While crafting his classic, Gothic tale, Stoker lived in England and worked for the London Telegraph newspaper. His story was published in 1897. 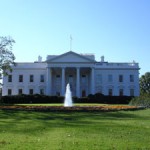 Historians have researched the family genealogy of Barack Obama, and found that his great-great-great-grandmother lived in Ireland in 1851.

The American President was descended from the Kearney family, whose most prominent member was an established wig-maker in Dublin.

Even in centuries past, the ancestors of Obama were interested in politics and community affairs. However, as styles evolved, wigs were no longer de rigeur in Ireland. The Kearney family decided to move on and try their luck in America.

Aran Sweaters Were Used For Identification – 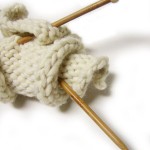 The sturdy, hand-knitted, and beautiful Aran sweaters of Ireland served a dual purpose. They kept the fishermen who wore them warm, even in harsh conditions at sea.

However, the special “family” or “clan” weave of Aran sweaters also served another practical (if sad) purpose: it was used to help identify the unlucky sailors and fishermen who lost their lives at sea.

Today, Aran sweaters, named after the cluster of Aran Islands, have become a coveted item throughout the world, and one of Ireland’s most popular tourist souvenirs. Few people know that the knitted patterns on these wool garments have a deeper significance.

More Ways To Learn About Ireland –

Learning about Ireland can be on ongoing adventure: there is so much culture and history to explore.

If you’re looking for another fun way to enrich your understanding of the country and its people, consider choosing a piece of traditional jewelry that you can enjoy wearing every day. 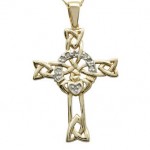 From Shamrocks that symbolize the Holy Trinity, to Celtic Cross designs (like the Celtic cross pendant on the left) with delicate knot work…you can enjoy the spirituality and creativity of the Irish people for a lifetime.

These pieces all hearken back to another time. The Trinity Knots you see on the cross shown here (each corner features a separate knot) have appeared on Celtic metal and stone work since the 6th Century. The crowned heart at the center of the piece is a more modern symbol, that illustrates loyalty in love.

As you can see, today’s Irish jewelry designs blend influences to produce stunning pieces that honor Ireland’s past.

One thought on “Fun Facts About Ireland”