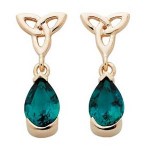 Some of the art treasures and historic landmarks of the Celtic people are still referenced today on all manner of jewelry designs, paintings, and crafts.

The timeless symbols and distinctive styles that have come to represent the rich history and spirituality of the Irish, Scottish and Welsh people are very much alive in today’s world.

Learning about Celtic art treasures and landmarks will evoke a deeper understanding and appreciation of the influences today’s Celtic artisans rely on to lend authenticity and meaning to their work.

Here is a look at some of the most stunning and resonant Celtic art treasures, and some modern-day designs that reference their artistry and beauty: 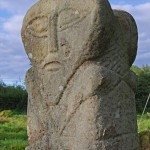 Located in Northern Island, in County Fermanagh, the graveyard is a popular destination for those who wish to appreciate the wonders of Celtic stone art first-hand.

The figures have a distinctive style, in that the heads of the forms are placed directly upon the torso, without a neck. The faces are flat and they are meant to evoke the sacred nature of the head in Celtic culture and mythology.

According to historical lore, heads were thought to hold a person’s spirit when they died. Celtic warriors would often take the heads of their enemies, in order to possess their souls, or spirits, after winning victories in battle. 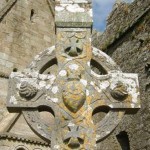 The beauty and depth of meaning found in Celtic crosses has made them enduring symbols of their people.

In Munster, County Tipperary, the crosses found on the Rock of Cashel are fine examples of stellar Celtic stone art.

At the Rock of Cashel, a series of ornate stone crosses dot the landscape, as a testament to the faith of the Celtic people.

The ringed cross is thought to be a remnant of Pagan beliefs, as its ringed center was once a Pagan symbol of the Sun. The four points of every cross reference the directions: north, south, east and west.

The Book Of Kells 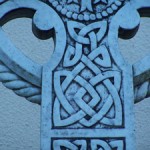 Created to depict the books of the Gospel with vibrant illustrations and text, the Book of Kells is considered the greatest art treasure of Ireland.

Often, the pages of the Book of Kells are bordered in intricate, almost hypnotic Celtic interlace that is still a primary symbol of Celtic culture.

The Celtic jewelry of today is often the best example of the way the influences of the past remain relevant. Here are some examples of stunning, modern Celtic jewelry designs that reference ancient symbols of techniques: 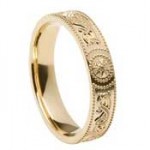 This Celtic Shield Wedding Band references the warrior spirit of the stone figures on Boa Island. Instead of carved heads, this band relies on classic Celtic shield symbols to represent strength and loyalty.

Carved by hand in Ireland, this shining 14k band melds the ancient symbols and meanings with a decidedly modern sensibility. 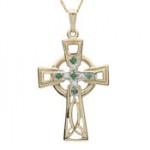 This beautiful Celtic Cross pendant recreates every stunning feature of the crosses at the Rock of Cashel, using emeralds and diamonds to add color and shine to the piece.

This 14k pendant is also crafted by hand, and its delicate inset of interlace makes it an authentic homage to the centuries-old Celtic Crosses that are such an enduring part of Celtic culture. 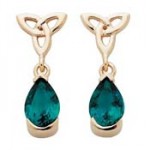 The color and vibrant beauty of the Book of Kells is the inspiration for these emerald Trinity Knot earrings.

The beauty of ornate knotwork is enhanced with two shining created emeralds.

The Trinity Knot is a symbol of the Holy Trinity, and its spiritual significance is made more powerful through the careful simplicity of the ancient design. Each segment represents the Father, the Son, and the Holy Spirit.