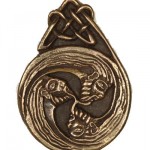 Spirals are dominant motifs in Celtic art prior to the Christian influence on the Celts, which began around 450 A.D., and are prominently displayed on ancient artifacts dating long before the arrival of Christians.

We know that these symbols are of great cultural and spiritual importance to the Druids of ancient Ireland. These people were by no means primitive and the intricacy of their art, despite how hard they had to work, is testimony to the significance they placed in the symbols behind their beliefs.

Druidism however did not allow the writing down of such secrets. Christians and Vikings were never given access to the wisdom of Ireland’s first great people and we can only speculate about these mysterious and elusive giants of Irish history. 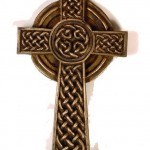 he craft was adopted of course by Christians and can still be seen on the Celtic crosses and stone engravings from the years after St Patrick converted the Irish people.

Today, the spirit is kept alive by traditional Celtic craftsmen such as ourselves and bronze craft workshops such as Irish Celtic Art Studio. Examples of hand carvings that hold true to the old Celtic techniques include the engravings that surround these Old Irish Blessings and Celtic Crosses.

Although the spiral can also be seen in artwork from the Middle East and Ancient Rome it is clear that the artifacts unearthed from stone age Ireland weigh far more heavily in terms of spiritual significance.