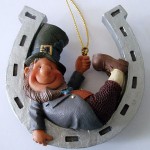 Many Irish legends are steeped in religion and the strong Christian belief system of the country’s past, but others are more charming, whimsical, and even funny.

In this post, we’ll take a lighthearted look at some fun Irish legends that still offer a fascinating look into the lore and culture of the Emerald Isle. 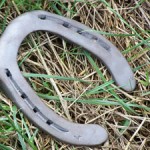 Today’s brides often tuck a small silver or ceramic replica of a horseshoe into their wedding gown, to bring good luck on their special day…but why is this ritual so enduring?

In Irish history, the bride and groom hang their lucky horseshoe above a doorway, with its tips pointing upward. In this way, they gain the most power from the talisman.

Brides carry it with them during their wedding ceremony, ensuring an auspicious wedding day and a blessed married life.

The origins of this rituals may be related to the shape of the shoe itself, with its resemblance to the crescent moon. The moon is often used as a symbol of fertility.

Whether or not you believe that a simple piece of metal can bestow good fortune, you can still enjoy this time-honored Irish tradition on your wedding day – just in case…

Another great way to incorporate Irish tradition into your wedding is with beautiful Irish wedding rings, which features delicate interlace and ancient symbols. 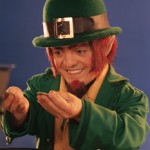 Legend has it that you must be crafty indeed, to trick an Irish leprechaun into revealing his secrets. He will delight in denying you the information you want.

If you find a leprechaun on your travels, and you wish to obtain the pot of gold he is said to keep with him, be sure to use all your charm and cleverness. It’s your only chance…

Today, the leprechaun is still a powerful symbol of trickery and magic. In fact, a series of horror films featuring a decidedly darker version of the Irish legend (Leprechaun, Leprechaun In The Hood) have become campy cult classics! It’s a fine line between comedy and horror with the Leprechaun film series.

Actress Jennifer Aniston had one of her first film roles in the Leprechaun series. 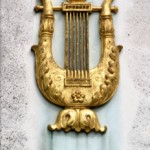 The legend of the magical Irish harp first appeared in a lyrical poem, which celebrated the ability of the instrument to lead a wayward Irishman home:

‘Twas a magic harp they’d made,
And when the maiden touched each strand,
The music led her father home
Across the misty land.”

Today, the harp is synonymous with Ireland, where it appears on every bottle and can of Guinness beer.

In centuries past, the lilting strains of the harp used to entertain Irish kings and queens at court. Irish musicians were world-renowned for their mastery of the instrument.

In Marion Zimmer Bradley’s classic retelling of the story of Camelot, The Mists of Avalon, harps were often used by characters with magical abilities, such as the Merlin.