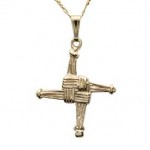 The myths and legends of Irish culture are mystical, charming, and sometimes very touching.

From the tale of the caring, devout Saint Bridget and her special cross, to the legend of the first Claddagh Ring – all have their place in the great Irish storytelling tradition.

If you’re interested in Irish myth and legend, you may also be interested in the many ways that today’s Celtic and Irish jewelry designs hearken back to the old legends.

The symbols and hidden meanings in today’s rings, pendants, and earrings all tell their own story.

Some Irish legends are whimsical (the Leprechaun comes to mind), but others are deeper and more heartfelt.

Here is a look at some of the prettiest new jewelry pieces, and their relationships to the Irish myths and legends of yesteryear. 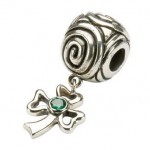 The Shamrock remains the premier symbol of the Irish people. It’s powerful message stems from the legend of Saint Patrick, Ireland’s patron saint, who used the simple, trefoil plant to illustrate the presence of God in the natural world.

Each leaf of the Shamrock was meant to represent the Holy Trinity – The Father, The Son, and The Holy Spirit.

Saint Patrick devoted his life to converting the Irish to Christ. He built schools and churches, and he preached his message with unflagging faith. His commitment to the spiritual message of the Bible has left a lasting legacy in Ireland, and all around the world.

You can celebrate this meaningful symbol of Ireland by choosing a Shamrock Charm for your Tara’s Diary Charm Bracelet. If you already own a Pandora’s Box bracelet, you can add this charm to honor your Irish ancestry.

This lovely cross pendant references the legend of Ireland’s Saint Bridget, whose compassion and faith was a source of solace to the sick and dying.

Saint Bridget’s devotion to God was demonstrated when she was caring for a man who has fallen ill. She picked up the straw rushes strewn about the floor, and created a simple, rough-hewn cross from them.

The first St. Bridget’s Cross was meant to provide a sense of peace and tranquility to someone who was suffering. Today, the legend of this simple cross lives on. 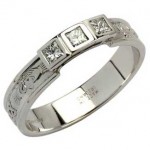 This truly stunning diamond Claddagh engagement ring puts a modern spin on one of the most romantic Irish legends, the Claddagh story.

The first Claddagh ring, with its crowned heart (for loyalty in love), held by two tiny hands, was created to honor undying love.

Richard Joyce was an Irish fisherman. He was kidnapped and sold into slavery far from his native Ireland. Joyce crafted the very first ring, now known as the Royal Claddagh Ring, while working for a goldsmith in Moorish lands.

After years of servitude, he was finally freed and allowed to return to his native Galway. His faith in his love, Margaret, was justified, as she had also waited for him. He gave her the ring he made, and they lived together for their whole lives.

All these Irish legends point back to love, faith, and a sense of wonder at the glory of God. These very Irish ideals make today’s jewelry designs powerful talismans with great sentimental value.