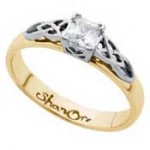 Perhaps you’ve noticed the Triquetra, one of the most recognizable symbols of the Celtic people, in the world all around you – upon the stone crosses in Irish churchyards…on works of art…in books…

The Triquetra endures because it is a testament of faith. Belief in the Christian God and in The Holy Trinity is at the root of this symbol’s meaning.

Each of the three sections of the Triquetra, or Trinity Knot, are meant to illustrate The Father, The Son, and The Holy Spirit.

When considering the impact of this ancient symbol, it’s important to take a look at the cultural history of the British Isles during the times following the Holy Roman Empire.


The Trinity Knot In Insular Art

In the 6th century, a new art movement emerged among the Celts. It was known as Insular Art. Symbols the Druids had used to worship Nature and The Goddess began to evolve as The British Isles converted to Christianity.

The mystical nature of the Trinity Knot, also known as the Triquetra, lends itself beautifully to today’s Celtic jewelry designs. Delicate Trinity Love Knots evoke the spirit of love and faithfulness, in the finest precious metals.

The best Celtic jewelry featuring the Trinity Knot is handcrafted in Ireland itself by master artisans who respect the ancient traditions. Throughout history, the stunning metal work of the Irish people has been prized and coveted.

From The Ardagh Chalice, an Irish war treasure adorned with precious jewels and spiral designs, to the Tara Brooch, with its ornate interlace, the best of Celtic symbolism and design are still referenced today.

In modern designs, Trinity Knots may rest alongside other, newer symbols. The first Claddagh Ring was designed as a symbol of love and affection, and it featured two tiny hands, gently holding a crowned heart.

Today, Trinity Knots with timeless resonance are combined with the romantic symbols of The Claddagh, offering a new twist that is unique and charming.

The message of devotion and the endlessness of God’s own love is clear in every curving, twisting line of Celtic knot work.

Earrings, pendants, and rings with both types of symbols offer a melange of beauty and hidden meaning to those who appreciate their Irish, Scottish, or Welsh heritage.

On Celtic wedding rings for men and women, the Triquetra adds polish to the expected, plain gold band. A whole variety of individual designs offer style as rugged (for men) or as feminine as could be wished.

As you can see, the legacy of the Triquetra lives on, as it will forever. The meaning and significance of the classic Trinity Knot is something that will never lose its timeless appeal.

Whether you opt for earrings, necklaces, or rings featuring the curving, trefoil design, you will be able to enjoy the culture and history of your ancestral home, every time you wear your special piece.