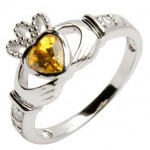 Giving a piece of birthstone jewelry to a friend or loved one is an excellent way to show your affection for them.

Birthstones are colorful and meaningful. They always add special significance to a ring or pendant.

Gemstones have been a source of mystery and fascination for thousands of years. Each birth month has its own signature stone, and often, there are mystical properties associated with each gem.

Whether or not you believe that a gemstone can bestow good luck, health, or some other positive attributes to its wearer, you will enjoy learning about the lore and myths associated with the stones themselves.

By choosing a mother’s pendant or silver Birthstone Claddagh ring, you can expect to give a gift with a real “story” attached.

In order to let the person you are giving to know the special story behind their ring or pendant, you can study the symbols and properties of birthstones and Celtic designs. We’ve compiled a quick guide to make it all easy.

The most common symbol found on today’s Irish and Celtic birthstone jewelry designs is the Claddagh Symbol.

The traditional Irish Claddagh Ring is used as a token of affection. It can be a gift of friendship or a declaration of romantic devotion. The first Claddagh Ring was created by Richard Joyce, an Irish fisherman.

Joyce was working on a fishing vessel, far from his native Galway, when his ship was boarded by pirates. He was kidnapped and forced to work for a goldsmith. He left behind the only woman he truly loved, and he never stopped longing for her.

In order to show his undying faithfulness, he created a ring which featured two tiny hands, gently holding a crowned heart.

Years later, when he was granted his freedom , he returned to Ireland and found Margaret waiting for him. He gave her the very first Claddagh Ring, and she wore it always.

When you choose a Claddagh birthstone ring for someone you care about, you are expressing the spirit of friendship and love.

Here is a quick guide by month:

January – Garnet : Dark-red, thought to protect its wearer from nightmares.

February – Amethyst: Pale-purple, thought to bestow peace and calm on its wearer.

April – Diamond: Icy white. A symbol of purity. Thought to give strength and power to its wearer.


May – Emerald: Deep-green. Believed to assist the wearer in seeing into the future.

July – Ruby: Crimson red. A symbol of passion and love. It is thought to bestow vitality.

August – Peridot: Yellow-green. The peridot is thought to enhance loyalty, dignity, and reputation.


September – Sapphire: Dark blue. The sapphire is believed to bestow mental clarity and sincerity in its wearer.


October – Pink Diamond: Pale pink. This pretty gemstone is thought to enhance beauty and charm in its wearer.

November – Yellow Topaz: Yellow-brown. This stone is believed to bestow intuition and mental acuity on its wearer.

2 thoughts on “The History And Meaning Of Birthstone Celtic Jewelry”